as found in the paper.

There are four lists: T1, T2, B1 and B2 and two list targets: p and q. The T lists hold resident pages and the B lists hold non-resident pages. The targets are the target sizes of T1 and B2 respectivly. Each page has two bits: the referenced bit and a filter bit. The filter bit distinguishes shortterm vs. longterm usage.

On fault a page is checked agains B1 and B2, if present the page becomes a longterm page, otherwise a shortterm page is inserted in T1.

The T2 target size q is a little more complicated, q almost measures the flux of pages from T2 to T1. 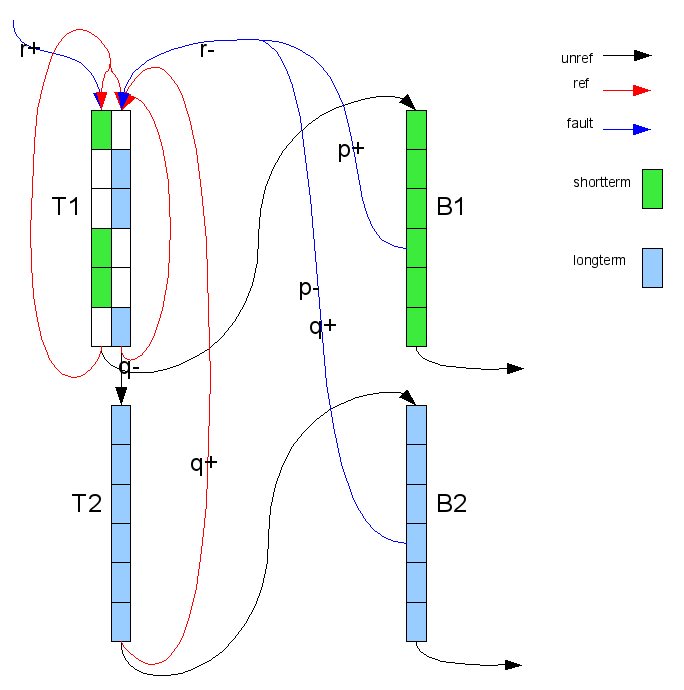 In order to adapt CART to multiple zones I took advantage of the fact that the resident and non-resident lists are nicely seperated. I keep global B lists with target q and per zone T lists with target p. When B/q values are used in T/p context they are scaled.

In order to avoid that new pages are promoted to longterm on their first check PG_new is introduced, it is set when a page enters the T lists and testcleared on T1 rotation. The short- to longterm promotion is skipped when new. (More on PG_new in the CART+ section).

Batching up the reclaim part of CART took a little thought. What I ended up with is this: instead of looking for a single match to the T1 and T2 rotation condition I'd rotate a fixed quanta of pages and isolate those that match the condition; moving the rest off to their resp. places. Then from these two candidate lists I'd p-balance-pick the proper one until I had the required number of reclaimable pages or one or both of the candidate lists dried up, in which case I'd just batch-rotate them again.

CARTs weakness is it's inability to handle cyclic access patterns. I have made an attempt to solve this deficiency. This is done by adding another adaptive parameter: r, which will measure the influx of fresh pages. A fresh page is one that is not on either B1 or B2; ie. r is incremented when the faulted page is not in B otherwise it is decremented.

This complicates the reclaim path a bit since we now have a possible third candidate list.

A possible improvement to this scheme would be to give these new longterm pages a second chance when T1 falls short of its target; the exact condition for promoting short- to longterm pages; and only reclaim these longterm pages when they are unreferenced on the second cycle.

For keeping track of the onresident pages a datastructure is needed that provides fast lookup and relative order. So far we viewed the nonresident tracking as two lists: B1 and B2; however as we all know lists are not known for their lookup speeds. Hence we need an alternate form. Rik provided a datastructure that almost fit my needs however it only provided for a single list NonResidentPages. I took that idea and modified it to suit my needs.

The general idea is to make a lot of small lists; small enough to search fast but big enough to preserve enough order to be usefull. Use these lists as hash-table buckets and assume that the hash-function has an equal spread.

Since the two lists we need to balance have a total maximum:

it is possible to break this into smaller lists. Say we take J buckets so that each bucket will have room for c/J entries we can then write for each j of J:

Under the assumption of equal spread we can then write that:

This leads to the possibility of having small buckets with two lists in them. So instead of the CLOCK per bucket in Rik's code I put in 4. That means not being able to play the atomic game and hence I'm stuck with a spinlock_t in there as well. Each CLOCK is implemented by a circular single linked list of entries. Each entry sacrifices 8 bits in a 2/6 split in order to accomodate this. 2 bits for a list identifier and 6 for the next slot position. (If you wonder why 4 and not 2; it fit. These extra two list heads came for free due to alignment issues and the extra lists actually come in handy. One of them is used as a free list.)

Also because CART makes balance decisions based on the size of the B lists I keep global per-cpu counters for each list. And I remove non-resident entires in the unmap path. In order to achieve that I had to modify the swap-cache to also free possible non-resident entries and added a similar construct to the generic file-cache. This stabilized the behaviour of the algorithm.

The code can be found here.