In order to understand the need for advanced page replacement algorithms, it is necessary to understand something about the memory hierarchy, access patterns and mixed workloads.

There are two types of memory hierarchy. The first one will be familiar to most people, it is the hierarchy of CPU caches, to random access memory (RAM). Caches near the top (level 1 or L1) are faster but smaller, while caches near the bottom (level 2 & 3, L2 / L3) are larger but slower. This provides a cost effective way to very quickly access a small set of data over and over again, while simultaneously being able to cache lots of data. The assumption is that the amount of data that a program accesses on very short time scales will fit in the L1 cache, and that that short term working set can slowly shift to other data. 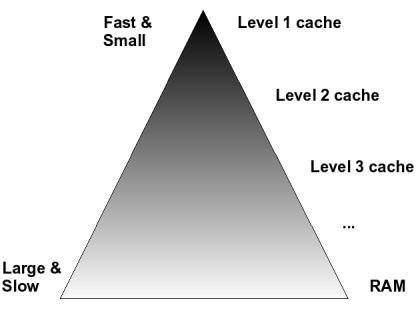 The second type of cache hierarchy is exclusive: a piece of data can be evicted from the second level cache, while it is still present in the first level cache. This is common when dealing with storage servers, like NFS or Samba servers and other NAS/SAN equipment. Typically the top level in this cache hierarchy will be the RAM on local workstations or computational nodes; the bottom level is the cache on a storage server.

More information on the problems LRU has with a second level cache can be found in this paper from the 2001 USENIX Annual Technical Conference by Zhou, Philbin and Li: The Multi-Queue Replacement Algorithm for Second Level Buffer Caches. Why this algorithm probably isn't very suitable as a first level cache replacement algorithm is left as an exercise to the reader

There are several types of access patterns that invalidated one of the basic premises behind LRU.

Garbage collection means that programs do not explicitly free memory they no longer use, and will not reuse memory quickly after last having used it. Furthermore, the garbage collection code can sweep over large areas of memory and can have an access pattern completely different from the rest of the program. The VM will have to cope somehow...

Computers are fast, users are slow - but they expect computers to be fast! It is common for one user program (eg. a web browser) to sit idle while the user uses another application (eg. watching a movie or searching through lots of email). When the user goes back to the web browser, the user expects the web browser to still be in memory. After all, the other data that the user accessed won't be accessed again for quite a while, so why swap something else out to cache that data?

On file servers, the client systems will cache the most frequently accessed pages. This means that the page that was accessed most recently on the file server will probably not be accessed again for a very long time, since it lives in the cache on the client machine.

Computers typically run a mix of the programs above. The VM will somehow have to balance memory use between these different programs and keep performance and responsiveness for all programs at acceptable levels.

When a system crosses the border from running under capacity to being overloaded, performance should degrade gracefully, instead of the system suddenly hitting a wall and grinding to a halt. In order for graceful degradation to work, we not only need some kind of load control or artificially introduced unfairness (we know how to do that), but we also need to be able to reliably detect when the system crosses this boundary. This detection might need to be integrated with the page replacement mechanism...